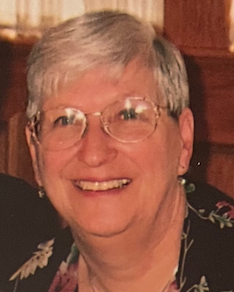 Maureen R McInnis, 78, of Auburn, NH passed away at home on November 15, 2022 surrounded by her family. She was born in Nashua, NH on April 8, 1944, the daughter of Maurice and Patricia (Lyons) Riviere. She was the beloved sister of Norm Riviere, and his wife Betsy of Philadelphia, PA and Peter Riviere and his wife Peggy of Lancaster, NH. She attended Presentation of Mary in Hudson, NH and graduated from Mount St. Mary in Nashua, NH in 1961.

Prior to retirement, Maureen worked for the US Postal Service for 30 years. During her years at the Postal Service, she held many positions and eventually retired as Postmaster of Auburn in 2003.

Maureen enjoyed many creative pursuits such as jewelry making, quilting, and sewing which can be found proudly hanging in family and friends homes. She served as a devout Catholic on the parish council of St. Joseph’s Cathedral where she was a lector for many years and used her sewing abilities to make prayer shawls for people in the community. Maureen and her husband John, both had a love of gardening and always had beautiful landscapes of flowers and a garden full of vegetables. They also shared an interest in beekeeping and loved showing the ins and outs of the honey making process to all who stopped by. After retirement, Maureen loved volunteering at the Audubon Society and also worked at the Diocese of Manchester. Maureen was known to tear up the dance floor and lend her vocal stylings to any song that came on the radio. The beach was a favorite getaway while raising their children and eventually Maureen and John purchased a place of their own in Wells Beach, ME. You were likely to find them sunbathing, bodysurfing, and enjoying steamers and cocktails with family and friends long after the sun had set. They had great times traveling with beloved friends on cruises and trips to Las Vegas.

Calling hours are at Lambert Funeral Home & Crematory, 1799 Elm Street, corner of North Street, will be from 4 to 7 p.m. on Monday, November 21st.  A Mass of Christian burial will be celebrated on Tuesday at 10 am in St. Joseph Cathedral.  A private burial will be held at a later date.

In lieu of flowers, donations may be made in her memory to Visiting Nurse Association of Manchester & Southern New Hampshire or EasterSeals New Hampshire.

To send an online message of condolence, please go to www.lambertfuneralhome.com.

To order memorial trees or send flowers to the family in memory of Maureen R. McInnis, please visit our flower store.